Rise of the Dutch Lionesses in Women’s World Football

The Dutch Pride of Lionesses is on the prowl to dominate Women’s World Football. Over the last decade, the tiny country of the Netherlands has become a formidable contender on the national stage ranking third in FIFA Women’s World rankings behind the USA and Germany, but ahead of France, England, Brazil, and Japan. How does a country with a mere population of just 16 million compete with nations housing populations significantly larger with decades-long history?

The same unique footballing culture, methods, and philosophy that brought rise to this tiny footballing nation in the 70s and 80s and continues to dominate world football this day, are now producing some of the most exciting talents on the women’s side. In just a decade the Dutch have become a formidable force making two successive World Cup finals and winning the European Championship in 2017. (Watch the full journey here: https://www.youtube.com/watch?v=GHlk71I6v7A)

The progress and success of the Dutch Lionesses is the result of a deliberate plan and coordinated strategy by the KNVB and supported by a national attitude to advance the women’s game to a level of importance similar to that of the men’s rather than regard women’s football as just a by-product of people’s interest in football.

Women’s football, as a professional sport, is still in its infancy. Although it gained popularity in Europe in the early 1900s, its growth was impeded due to dominance by male administrators favoring the men’s side of the game. In some cases women’s football was even banned in countries, forcing the game underground. The bans in Germany and the UK were only lifted as recently as the 1970s.

Regardless, the Dutch have emerged as the next big powerhouse in women’s football. Against all expectation they won the 2017 European Championships, defeating Denmark in the final, beating Sweden and England along the way, and to prove it was no fluke, they then reached the finals of the World Cup in France in 2019, only to lose to the United States who hold a significant advantage in infrastructure, history, and population that is 22 times greater than that of the Netherlands.

It was the concept of total football that initiated the success of the men’s national team, who still benefit from this today, that was popularised by Ajax coach Rinus Michels, and Johann Cruijff as its arch exponent. By applying these same unique methods and philosophies and tailoring it to the women’s game in the Netherlands, it is a conscious decision by the country’s football authorities to intentionally invest in the women’s game at all levels.

Why the Women’s Team is Doing So Well

The success of the Dutch women’s national team is found at the grassroots foundation the country has in place.

The Royal Dutch Football Federation (KNVB) has set ambitious 5-year targets to grow the number of female members by 25% to 200,000 and to ensure that, at amateur clubs, at least 25% of all staff are female. They are also working with their main sponsor ING, with the bank decreeing that where they are the main sponsor of an amateur club, 25% of all money they donate must, at a minimum, be spent on girls’ and women’s football.

Amateur clubs are the building blocks that set the foundation of Dutch football to succeed on the national stage. This culture provides the environment for players to flourish and eventually get identified and advanced to the regional and national teams at various age categories.

countries in Europe and significantly more progressive than countries in South America and Africa, where it remains relatively alienated.

This sentiment is further demonstrated in the commitment to equal opportunities within football in the country when the Dutch FA (KNVB) appointed the coach Sarina Wiegeman as the ambassador for girls’ and women’s football. Already highly respected as the coach that brought them European Championship success and guided them to within one game of lifting the World Cup, Wiegeman brings a source of inspiration to advance the women’s game, particularly for the next generation of Dutch women who want to be involved with the sport in some capacity.

The increased standards instilled from the ground up to have set high expectations for the Lionesses which will surely continue to produce some exciting players going forward. The improvements are sure to positively impact domestic women’s football, although, similar to their male counterparts, the best Dutch women’s players will likely continue to migrate to the other top European leagues due to the financial rewards offered.

Unlike US-based pro leagues, the Dutch recognize this as a positive as it opens up spots for younger players to rise to a higher level of play developing a greater depth of talent across the board. Additionally, young girls seeing Dutch women succeeding in top European and US leagues, inspires them to match their achievements, raising the standard of the national and international game even further.

Below we’ve highlighted just three outstanding talents who are making history thanks to the result of the Dutch talent development system of the Netherlands and we expect many more to follow.

The 27-year-old Martens has already had a glittering career with 2017 being the highlight so far for her. Not only did she pick up a European Championship gold medal, but she was named Player of the Tournament. She was also voted UEFA Women’s Player of the Year and the Best FIFA Women’s Player. Martens can play as a midfielder and a winger has had a nomadic playing career. Beginning in her native country with Heerenveen and VVV Venlo, she has since had spells in Belgium (Standard Liège), Germany (Duisberg), and Sweden (Kopparbergs/Göteborg and Rosengard). She currently plays for Barcelona. She has won domestic cups in Belgium Sweden and Spain. Mertens has 110 caps for her country and scored 44 goals, although a foot injury ruled her out of most of the 2019 World Cup campaign.

(Photo by Eric Verhoeven/Soccrates/Getty Images)
At only 23-year-old Vivianne Miedema has scored more goals for her country the Netherlands than any other player in history…yes we’re also including the men’s side in this record. She’s netted 69 times in 87 full internationals so far. Born into a footballing family, Miedema made her debut aged just 15 for SC Heerenveen, the youngest player ever to appear in the Eredivisie Vrouwen.

She then moved to Bayern Munich where, in her first season with them, she helped the German side go through the campaign undefeated, winning the title for the first time since 1976. And the

following season she helped them defend that title. Miedema moved to Arsenal in 2017 and has now played 69 times for them, averaging almost a goal per game. She has won the WSL (Women’s Super League) and WSL Cup with the Gunners and was named PFA Player’s Player of the Year last season. Miedema’s unique characteristic is that she rarely celebrates her goals out of respect for her opponents.

Daniëlle is a dynamic 28-year old midfielder with 102 caps for her country netting 21 goals during this time. She was a member of the 2017 European Champions as well as a major contributor to the recent World Cup runner-up in 2019.

She began her career with Willem II, then moved to VVV-Venlo, and ending up at PSV Eindhoven. A brief spell in Swedish football with Kopparbergs/Göteborg followed in 2015, but later that year she joined WSL club Arsenal where she remains to this day, having recently signed a new long-term contract with them.

She was part of the side that won the WSL in 2019, and she has also lifted the FA Women’s Cup, ánd the WSL Cup. 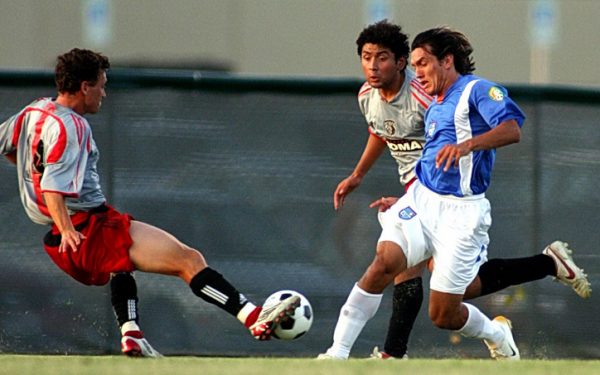 Players born in 2012 fit in this age group.We are a fun group of players and parents. We focus on developing the fundamental skills of the players but are also instilling a smart way of thinking about the game. Call us and come out for a skills session.

In 2001, Wilco partnered with the Plano YMCA and formed Club Classic Soccer. A club emerged from a single skills session consisting of only 3 players. Over the subsequent 11 years, Club Classic Soccer became an exclusive boys soccer club with the merger of Texas Spirit, an all-girls soccer organization. As the originator and Executive Director of the Brother-Sister club concept, Wilco grew the clubs to over 60 teams with 25 coaches in 3 YMCA locations.During this tenure, Wilco also revolutionized the way young players under the age of 10 received training by forming the Super Development League (SDL). At the time, North Texas State Soccer Association (NTSSA) only allow recreational soccer to be coached by volunteer parents, restricting teams to be formed under 10 years of age with no more than 1 skills session per week from a professional youth coach. Mostly volunteers and well-meaning yet uncultured soccer administrators unknowingly were prohibiting key developmental years with these regulations out of fear and stereotyping professional youth coaches. Having the experience of growing up in the Dutch Soccer Youth System, and understanding other developed soccer cultures, Wilco innovatively created the SDL to foster a positive development environment for young players to enjoy and learn the game sooner. The league grew to over 350 teams within 2 years and advanced the North Texas youth soccer landscape forever.Wilco's key strengths exist in strategic thinking and vision. The current footballing soccer pyramid and culture in North Texas has remained static and is due for significant advancement. This pursuit will evolve through the DFW Dutch Lions FC. Learn More About Wilco Ravestijn